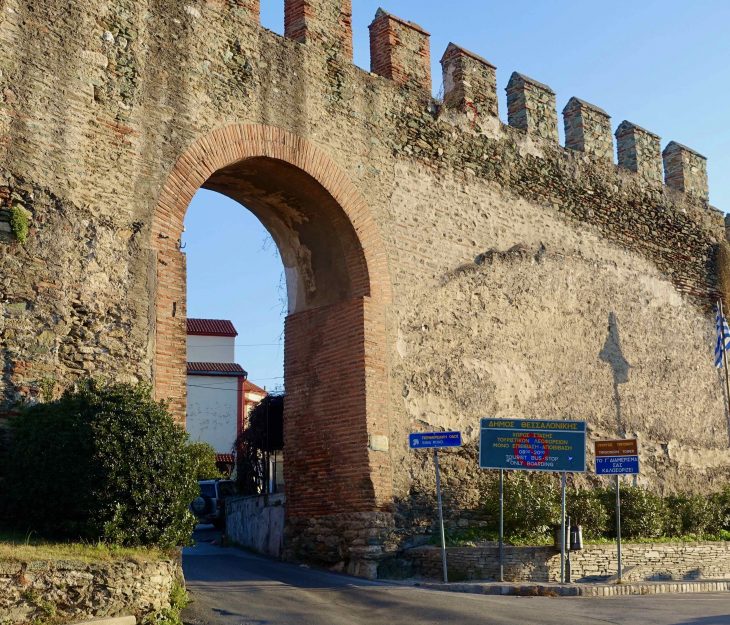 “For the Lord Himself will descend from heaven with a shout, with the voice of an archangel, and with the trumpet of God. And the dead in Christ will rise first” (1 Thessalonians 4:16 NKJV).

I’ve spent a bit of time in Thessaloniki in Northern Greece.
Thessalonica (also Thessalonike) was an ancient city of Macedon in northern Greece which today is the city of Thessaloniki. Made capital of the Roman province of Macedon, the city flourished due to its location on the major trade route to the east and continued to thrive as one of the most important cities in the Byzantine Empire. Its prosperity and cultural reputation attracted such figures as Paul the Apostle, Roman emperor Galerius, Cicero, and Lucian over the centuries. Substantial archaeological remains have been excavated and a Roman triumphal arch still stands as one of the city’s most famous landmarks. Thessalonica is listed by UNESCO as a World Heritage Site.
I’ve walked the harbor, and then up to the overlooking stone walls which seemed to take forever walking up the road and of course the Via Egnatia right thru the heart of town. (Great Starbucks not far away.)
The Via Egnatia (Greek: Ἐγνατία Ὁδός Egnatía Hodós) was a road constructed by the Romans in the 2nd century BC. It crossed Illyricum, Macedonia, and Thracia, running through territory that is now part of modern Albania, North Macedonia, Greece, and European Turkey as a continuation of the Via Appia.

Thessaloniki is a beautiful harbor city. Paul wrote to the church, there, from Corinth. I’ve read this passage there. The people of the Corinthian church were difficult people and challenged Paul at every opportunity. Wickedness prevailed throughout the Roman Empire. The things Paul wrote about were those activities that the Lord Himself said were evil.

THAT DAY
It was a beautiful, sunny day. The air was crisp. All seemed right.
Yet God was far from the hearts of people. They lived only for themselves.
Everything was greed, selfishness and wickedness.

Not as mankind defined it, all were satisfied in their way.
Has God said was the daily cry. If it feels good do it their heart song.
No barriers. No limits. Might made right. Gold ruled.

Christ defeated death. Raised by the power of God He rules.
Just a step away in Heaven. Existence is ruled by Him.
All things exist and are held together by His power. He is the Creator.

Today evil and wickedness have come to full bloom.
God steps off His throne. Jesus steps from heaven to this world.
With a shout, all the dead in Christ shall rise.

But we are not left behind. That same shout translates us from here to there.
All will gather at the feet of Jesus. No more tears. This world left behind.
We will rule together with Him forever and ever and ever.